The Vietnamese cuisine is possibly the best and most varied throughout Southeast Asia. In restaurants, the dishes are ordered according to their main ingredient: chicken, fish, and so on. The menus are always accompanied by rice and noodles as well as a soup (Pho) prepared with shrimp, fish and ginger, to which vegetables, noodles and meat are added.

Gastronomy varies a lot from one region to another. Vietnamese cuisine is like its culture: it reflects the many contacts it has had with other cultures over the centuries, among which include China, Khmer and French.

The rice (com in Vietnamese) is the staple of the diet and the basis of the country’s agriculture. In fact, the change experienced by rice production reflects the evolution of the country’s economy. In the early 1980s, Vietnam depended on imports to feed its people; as a result, there were entire provinces where people went hungry. 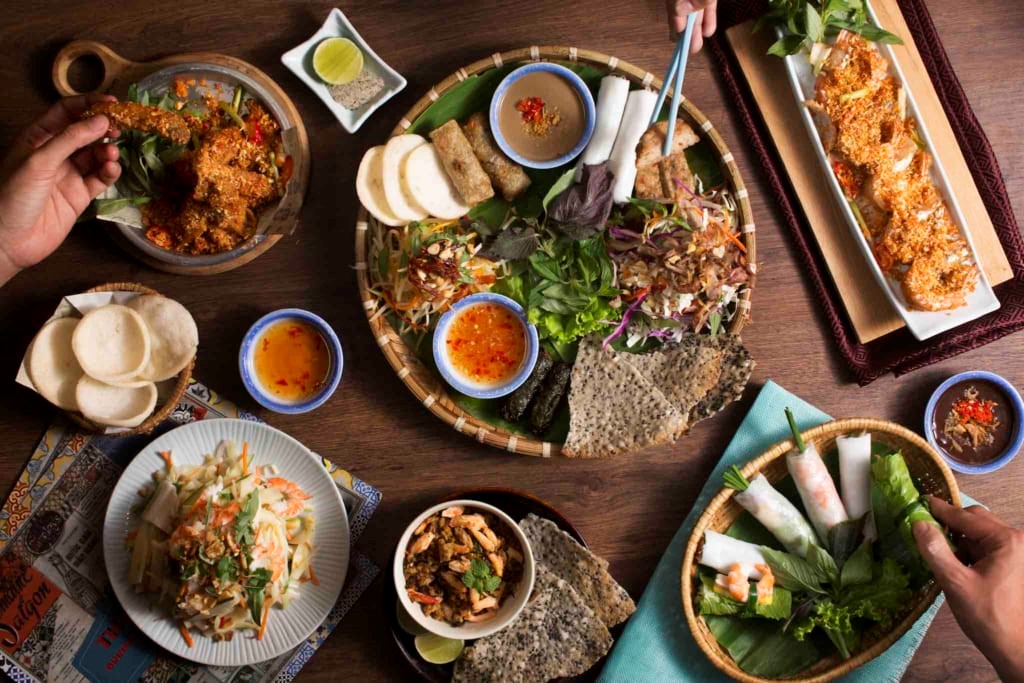 Nowadays, without collective farms, Vietnam is the third largest exporter of rice in the world, despite the persistent fear that the country will run out of rice, which often leads the government to suspend exports and impose quotas.

The years of Chinese influence and occupation are evident in the use of chopsticks and the tendency to eat dry white rice instead of mixing it with other foods.

Tofu, mushrooms, eels and snails are also highly valued at the Vietnamese table . But, undoubtedly, one of its greatest delicacies is the snake, especially if it is the cobra. In the first place they will taste a delicious stir-fry with the entrails of the animal, and later, a stew with its meat in which ginger will not be scarce.

There is a fish sauce called “nuoc mam”, which is a little less essential in Vietnamese cuisine. This sauce, which is not lacking in any Vietnamese table, as it happens with the salt in the Vietnamese countries or with the soy sauce in China.

The Noodles: if there is a dish that defines Vietnam , it is the pho, a simple broth of rice noodles with other ingredients called “the lover of Vietnamese cuisine.”

At home, Vietnamese people usually eat rice at meals as an accompaniment, three times a day. But when they leave, they usually ask for pho. The Vietnamese use food as a euphemism to refer to their relationships. When you get tired of rice (wife or husband), eat pho (the lover). This noodle soup is usually eaten at breakfast time or as a snack at night, although many people also take pho at noon or for dinner.

Cambodia is an agricultural country, mainly in the cultivation of rice. Thus, rice plays an important role in gastronomy and in the daily life of this country.

Cambodian cuisine emerged as a fusion of several Asian cuisines, such as Thai or Vietnamese. Their recipes are often accompanied by aromatic herbs to give a flavor and a peculiar aroma, and all kinds of noodles.

Some popular dishes that visitors to Cambodia can taste are Amok , a special Khmer dish with fish, coconut milk and turmeric, Prahok , a type of cake that is fried in banana leaves with fresh green vegetables and steamed rice, and Kroeung A special dish of vegetables with dips to dip.

Although in our culture we may find something shocking, in Cambodia it is common to eat all kinds of insects, something that catches the attention of tourists and that the most daring qualify as a delicacy.

One of the most successful insects is the fried tarantula. Those who have tried it say that it tastes like a shrimp, and if you manage to abstract from what you are eating, you can enjoy its great flavor.

In any market you can find a wide variety of these animals that for Cambodians is something so everyday.

Throughout its entire length, Laos is crossed by the fertile plains around the Mekong River, which is why vegetables, fresh vegetables and especially rice predominate in its meals. The Khao niao , literally “sticky rice”, accompanies every meal in a thousand ways, whether in the form of balls or in the form of rice cakes, is one of the most popular foods in Laos. 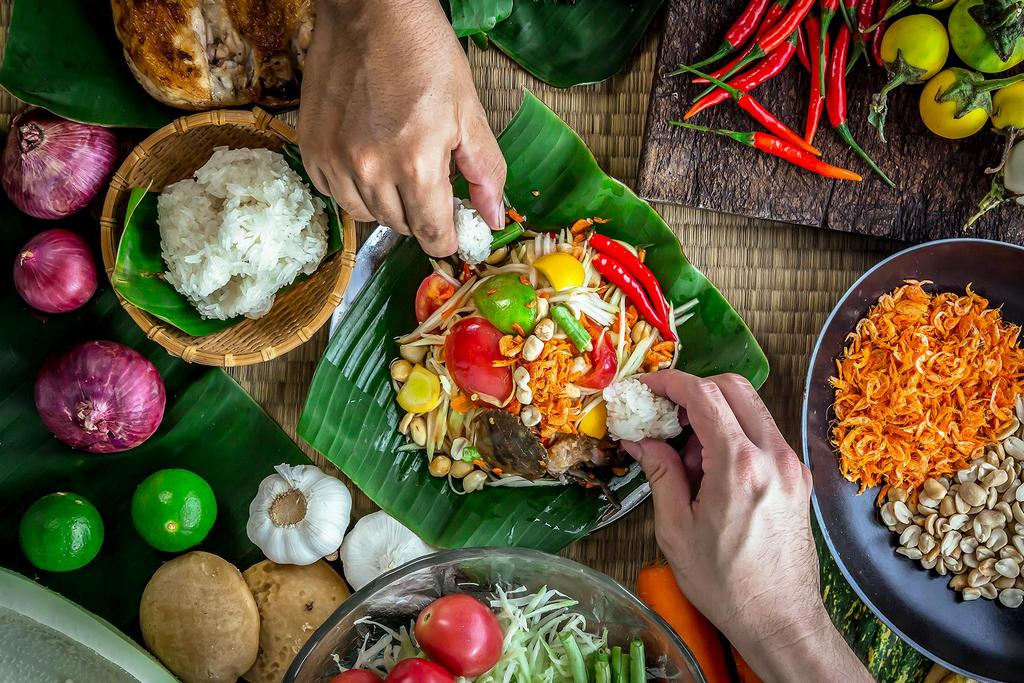 The cuisine of Laos has many regional variations due to the local local foods of each region. Traditional Laos food is spicy and delicious, based on fish, pork, poultry and especially vegetables and veggies. The meat is usually grilled so the dishes are low in fat. They are often accompanied with coconut oil.

Laap is a traditional dish from Laos made of minced chicken or duck meat, mixed with dried rice grains and seasoned with different spices. In Lao cuisine, spicy and bitter taste predominates in most dishes, seasoned with a large amount of herbs such as lemon basil, dill, coriander, mint …

Tam Mak houng or green papaya salad is a typical sliced ​​papaya salad with garlic, chili, sugar, fermented fish sauce and lemon juice. The traditional dish par excellence and unique is the padeck. It is a mixture of fish and salt that is marinated and preserved in a jar for a year.

The cuisine of Myanmar is very influenced by Chinese cuisine. Indian food is also quite popular, especially in Yangon, which had a very large Indian population during the British colonial era. In the most tourist sites you can find restaurants that serve accidental dishes without problems.

THE HOUSES OF TEA

A local tradition that has become a tourist experience that you can not miss is a visit to a tea house. They are very popular places to meet friends and family. Tea houses are places that have long been reputed to be openly discussing politics, with the accompanying rumors and spy myths. Some tea houses open early for breakfast, while others have a more nocturnal atmosphere, open late into the night.

As in other Asian cuisines, in the one of Myanmar the bitter, spicy and salty flavors are combined. For example, a mild curry may be accompanied by bitter leaves, dried chili peppers and a salty seasoning, such as fish paste.

The typical breakfast is the noodle soup, like mohinga is the typical national dish, a fish soup with rice noodles, onion, lemon grass, garlic and chili. This type of dishes are served at the tea houses or are available to take in the markets.

The noodles are an indispensable dish when it comes to eating, you’ll see many locals with a bowl in coffee shops or tea houses. Most of the dishes of the country’s popular dishes include noodles and a kind of salad in which vegetables are rarely included. They are cold dishes that often include raw onion, chickpea flour, chile or cilantro and served in a kind of soup.

Lunch time is the ideal time to try Burmese curry as it is usually when it is cooked. The meat, fish or shrimp curry will be accompanied by rice, a kind of watery soup, and fried vegetables.

There are endless regional regional variations to discover as you travel. The food of Rakhine State, for example, is influenced by its proximity to Bangladesh, so the curry is much hotter and many dishes include beans and legumes.

Vegetarians should not have problems when it comes to finding suitable foods since some Buddhists are limited to meat consumption, so there are many other alternatives.

THE DRINK OF MYANMAR

Tap water is not drinkable in Myanmar and bottled water can be easily purchased anywhere in the country. In many restaurants green tea is left in jars on the table and can be consumed freely, being quite safe. Black tea is usually consumed with lots of milk and sugar while coffee is almost always instant.

Barrel beer is usually served in bars or nightclubs, the most popular being Myanmar Beer, produced by a company attached to the government, also available bottled.

Vietnam – Marvel of the Far East

Sorry, no posts matched your criteria.